Flying with a Bike Trailer

Cyclone Bike Trailers are very useful to travel by air. Both the Cyclone Trekking and Chubby Bike Trailers are used by people all over the world and flown to many different destinations. But how do you pack? And what about the size, isn't it slightly oversized...?

We see some different size regulation from airlines and often customers worry on potentially paying extra fees when they travel with their Bike Trailer.

The informative website Airhelp.com lists the safe common size for checked luggage as:

That makes both trailers just above the allowed airline size.

However in practical real life we see many customers using the trailers without trouble on several flights. 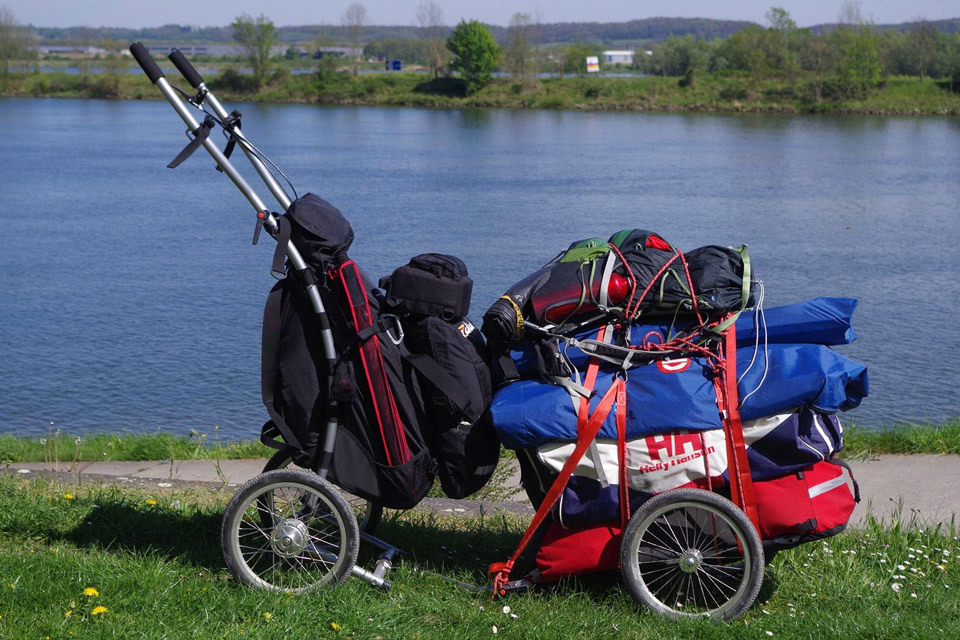 This will be hard to pack for the flight... 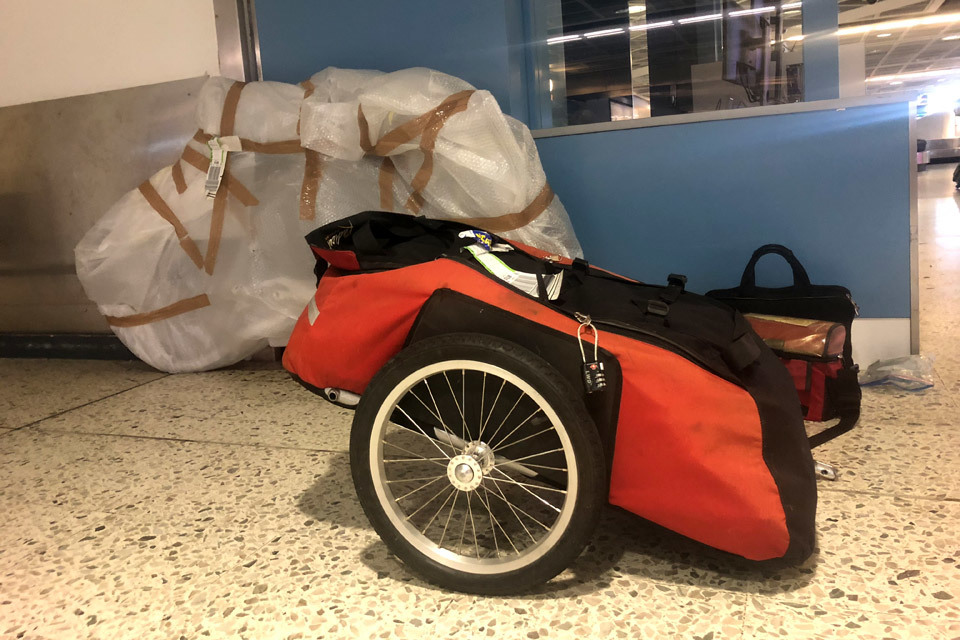 Layne's Bike Trailer ready to board

"I have just returned from a first overseas trip with my Radical Chubby. I flew Manchester-Copenhagen, Copenhagen-Nice, Nice-Frankfurt, Frankfurt-Manchester with SAS and Lufthansa.

At no point was the size/dimension of the trailer questioned. My Brompton travelled safely and securely within without any damage whatsoever". (June 2016)

"The trailer traveled very well - no issues at check in from either Air Transat or Air Canada". (August 2017)

"I traveled with Turkish Airlines from Manchester to Havana via Istanbul, and returned via Caracas in Venezuela. Check in was very easy on all occasions - no fuss or questions over the trailer - I tend to pack the wheels away before approaching the desk to reduce interest in the bag! The trailer travelled well in all of the flights and protects the bike extremely well. No extra costs required - it was just accepted as a regular piece of luggage". (August 2018)

"I have just completed another journey with my Radical Chubby and Brompton - this time closer to home. I’ve been doing a Bauhaus tour of Germany and cycled with the trailer from Berlin to Weimar (via Potsdam, Naumburg, Wittenberg, Dessau, Halle & Jena). I flew with EasyJet this time - paying for a bicycle in the hold - no problems with weight or size allowance - all went very smoothly. I tend not to put any real extra protection in there apart from some foam wrap around the top wheel in the top compartment. Over the miles the trailer has only ever picked up minor scrapes". (July 2019)

Layne Gneiting travels the world with his "Way of the Hero", inspiring managers into leaders. His travels include the use of several Cyclone Trekking Bicycle Trailers so they have some experience in air-travel with Bike Trailers.

We presented Layne with two faq's we often hear:

What's your feedback on exceeding the max allowed airline dimensions for checked luggage.

I haven’t had a problem. So far I’ve taken the Cyclone Trekking trailer to Iceland, Slovenia, Croatia, Macedonia, Ireland, and they just check it in as my luggage. That’s flying on British Airways, Delta, Air France, Aegean Airlines, and RyanAir. I suspect that’s for a few reasons. It could be that the Cyclone is fine as luggage. Another possibility is they look at the bike box and have pity (I think the box and its airline fee dwarf the silly idea that the Cyclone doesn’t meet their dimensions). Plus, it depends on how you approach the counter people. If you treat them as fellow human beings and use their names, they reciprocate and give you a break. Or maybe all the above, but I don’t ever recall having to pay extra for the Cyclone.

How do you pack your bike trailer for airtravel?

The Cyclone is my suitcase. When I tour I want the luxury of agility, and most times I depart from a different country or airport than than when I arrived, so I want to hit the ground running. To pack it all in I always stash the arm and hardware inside the trailer itself (in their own bag so they don’t go missing). Then I bring the wheels in the wheel bag as my carryon. HACKING TIP: If you have other bags like a laptop or satchel, grab a Chinese bag (those strong but light nylon shopping bags) and stuff both those bags and the wheel bag in it as ONE carry-on.

WARNING: one of my clients met me in Budapest and left the wheels on the plane! He had to overnight a new wheel set, and missed the first 2 days of our trek. Eventually he took a train and caught up with us. But don’t forget the carry-on!

I pack my trailer according to zones. The front is my “bedroom” and it’s where I put tent, sleeping bag, cot, and pad. The middle is my “kitchen," where I place stove, cookset, etc. The back left is my “pantry” (where I keep snacks, emergency dried food packets, and groceries I pick up along the way) and the back right is my “bathroom” (towel, washcloth, toiletries). The sides are reserved for tools and bike stuff, and my “closet” (clothes) get flattened out atop the other items. Mind you, everything is organized into Eagle Creek organizing bags (or stronger Cotopaxi bags) so they don’t shift about and make a mess.

Here’s what a few of Layne's managers had to say:

"My ticket did not include any luggage so I had to pay for any luggage that I sent over. It seems like it was like 60 to $80 each way??"

"I had no problem with travelling with the trailer bag. No extra fees either since I was under the 50lbs".

"I don’t recall paying extra, but couldn’t say for sure at this point. I’m pretty sure the weight was within the limits. I did lose a couple small parts along the way, which was a bummer".

"Yes, they did for me. Of course my bag was 70+ lbs 😂. I would think if you were under weight it wouldn’t matter for most airlines. I’ve seen duffel bags just as big go through without issues".

"It cost me about $100 to go to Croatia because it was oversized and $200 for over sized baggage coming home".

Most people that don't worry too much and just set off, experience no trouble with air travel with a Cyclone Trailer.

We seldom hear of people actually paying extra fees but it can happen...

We cannot make the Chubby smaller since the Brompton has the size it has and has to fit in ;-) 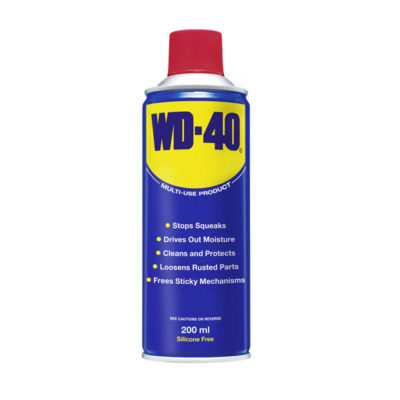 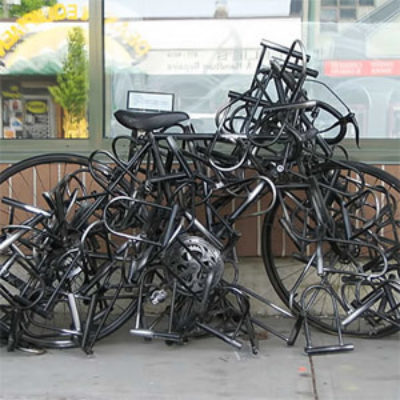 Why I never lock my bike 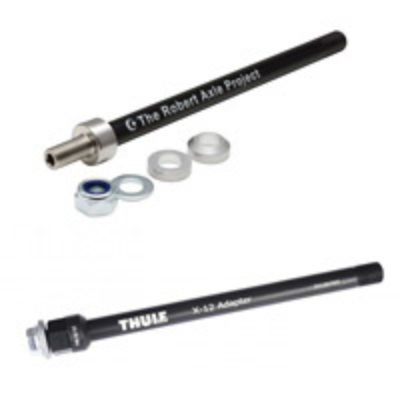 Bike Trailers on X12 Thru Axles